Ever since the Finnish conductor Osmo Vanska became the music director of the Minnesota Orchestra in 2003, he has been inspiring the players, delighting critics and ushering in an era of growth and dynamism for this 106-year-old ensemble. 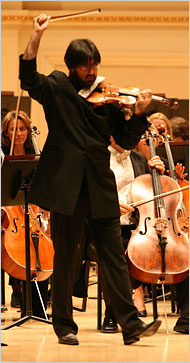 The only worry voiced by audiences in the Twin Cities is that some other American orchestra may try to steal him. When he arrived in Minneapolis, Mr. Vanska announced his intention to make the orchestra one of the best in America, whatever that means.

The secret is out. Mr. Vanska, lanky and exuberant at 56, led the Minnesotans in an impressively played and exciting program of Sibelius and Beethoven at Carnegie Hall on Monday night.

The program opened with an engrossing account of “The Wood Nymph,” a rarely heard Sibelius tone poem, completed in 1895 when the composer was 30. This was the work’s first hearing at Carnegie Hall. Based on a poem by Viktor Rydberg, it tells of a handsome young man, heading for a party one evening, who wanders into mystifying terrain, where he encounters an alluring wood nymph and falls for her immediately.

At the start of the 25-minute score, the orchestra’s mellow brass and rippling strings played a robust march that evokes the hero bounding through the woods. Yet strangely obsessive triplet-figures in the violins suggest that even in this early work the visionary Sibelius of later years was lurking.

In one dreamy passage, thick, pungent string chords and a rapturous cello solo convey the man and the nymph in a scene of romantic bliss. But the nymph never returns, and the misery of the distraught man, who lives out his life alone, came through here in the vivid and intense performance of this volatile and finally bittersweet work.

Mr. Vanska’s Finnish background may give him an edge in conducting Sibelius. Still, nationality is overrated as a key to insight, as the charismatic Greek violinist Leonidas Kavakos demonstrated in a magnificent account of Sibelius’s Violin Concerto. It is hard to play this teeming 35-minute work, especially the rhapsodic 16-minute first movement, with the requisite expressive freedom, while also bringing coherence to the music. Mr. Kavakos made that balancing act seem utterly natural in his commanding yet intimate performance, aided sensitively by Mr. Vanska and the orchestra.

In the final movement, a robust, earthy and fitful dance, Mr. Kavakos showed what it means to be a pro. The chin rest on his violin came loose. So during a free moment he switched violins with Jorja Fleezanis, the concertmaster, and continued playing the piece with her instrument. She tried to fix the violin during the concerto but could not.

After the performance, during the enormous ovation, Mr. Kavakos gave a big hug of contrition to Mr. Vanska and a big hug of solidarity to Ms. Fleezanis. He even played a quietly brilliant encore, “Remembrances of Alhambra” by Francisco Tarrega, on the borrowed violin.

The ovation for the bracing, fresh and texturally transparent account of Beethoven’s Seventh Symphony that ended the concert was also ecstatic. For me the performance was perhaps too exacting and emphatic. But it was a pleasure to hear the piece played with such rhythmic vitality and scrupulous attention to detail, free of an interpretive agenda.

Mr. Vanska and the Minnesotans have won deserved acclaim in the last few years for his recordings of the complete Beethoven symphonies on the Bis label — just another hallmark of the still-new Vanska era at the Minnesota Orchestra.